The Guilt Tripper and The Resurgent

The Guilt Tripper sounds like the name of a new Will Ferrell movie…The Resurgent sounds like a Nicholas Cage movie. I just googled both of those to see if they were already movie titles and thus, unable to be used as nicknames here. They’re not! How about that…...I’m writing this to get Holly off my back (I bet her $10 that I would write something by tonight….) and because I recognize we’ve been quiet.
I should start off by saying the Guilt Tripper isn’t being called that because he purposely tried to make me feel guilty, but, it happened nonetheless. Let me explain.

I met the Guilt Tripper on Match.com. He was nice, a die-hard KU fan, and persistent. We had plans to meet for dinner on a Sunday (coincidentally the same day I planned to have brunch with another guy……scandalous, I know…). However, I got REALLY sick that Saturday night and had to cancel plans with both dates. I hated cancelling, but the chances of me keeping food down were minimal-and any chance of making a decent first impression was zonked. (Zonked: adj, exhausted; tired out). He tried to reschedule for the following weekend, but I was already booked with some dog stuff. I’m not sure if he bought my excuse, but, it was legit. So, we rescheduled for the FOLLOWING weekend for 2 pm at a coffee/brunch spot. I then had a conversation with my roommate about how weird it was to meet at 2 pm (Am I supposed to eat lunch? Not eat lunch? Coffee? Snack? What would a normal person do at 2pm meeting someone for the first time?)

The day of the confusing 2 pm date, I lounged around until it was time to hop in the shower. I checked my texts to confirm where we were meeting AND THEN OMG YOU GUYS I REALIZED I WAS ACTUALLY SUPPOSED TO BE THERE AT 1 P.M. BUT IT WAS 12:40 WHEN I LOOKED AT MY PHONE AND I HADN’T WASHED MY HAIR IN TWO DAYS OMG AND THE PANIC THAT TOOK OVER MY BODY MADE IT ALMOST IMPOSSIBLE TO EVEN TEXT THE GUY AND I SCREAMED AND RAN UPSTAIRS AND YELLED AT MY ROOMMATE ABOUT HOW STUPID I AM AND THEN SCREAMED AND SHOWERED AND DIED.

………………..I fumbled through an apologetic text about how I was going to be..ahem…an hour late.

So, at this point..I had cancelled on this guy two weeks before, had an excuse about why I couldn’t meet the following weekend, and now I’m texting him 15 minutes before I’m supposed to be there to say that I’m running an hour late.

(You all know I’m kidding, right?)

Anyway. So Guilt Tripper agrees to meet at 2pm instead of 1 pm. I got there around 1:50 (I didn’t really think those 10 minutes would redeem my actions, but it didn’t hurt to try..).

YOU GUYS. THE DATE WAS AWFUL AND TERRIBLE.

We fumbled through the most tense, cringe-worthy, and awkward conversation I’ve probably ever had. I was incredibly apologetic (and he wasn’t super kind about it…which I get…but still..), and then  he made a semi-racist comment that I couldn’t overlook. (Is semi-racist a thing? Actually..probably not..Let me rephrase that..) He made a racist comment that I couldn’t overlook.

And then the date ended, and I got in my car. I felt guilty that I had been such a flake leading up to meeting him, but then I felt guilty for feeling guilty because this guy WAS NO GEM. I called my friend and relived the horror of these happenings. I proceeded about my day sure that I would never hear from him again, because there was NO way he could think a) that I was a decent person and b)that the date had gone well.

And then he texted that night. And the next weekend. UGH. And then I felt guilty as I reminded myself how much of a flake I had been…and was being.. but. At the end of the day, the Guilt Tripper was probably the worst date I’ve been on....Yuck.

The Resurgent is actually a previously blogged character who had..well..re-emerged into the picture. Since I already rambled about The Guilt Tripper for so long, I’ll keep this brief. The Resurgent came back into the picture, but isn’t in the picture now. He’s a rare bird (I know I’m a pot calling a kettle black on this guys, I knowwwwwwwww) and admitted that when we went out before, he had actually met another girl (who he described as a "crazy girl") around the same time and decided to continue seeing her, rather than me. He attributed this to his history of being attracted to adventure/excitement. When it didn’t work out with crazy girl and The Resurgent, he contacted me again. It’s humbling to have a guy tell you to your face that he picked a different girl over you, but it’s odd when he’s telling you in the context of almost asking for a do-over. We did see each other an additional handful of times after his resurgence.

However, for a myriad of reasons that are too lengthy for me to delve into, I decided The Resurgent and I weren’t going to hack it. And that’s the end of that. The Resurgent knows about this blog and has read it before, so, there's a good chance he'll read this, which is another reason I'm being vague. 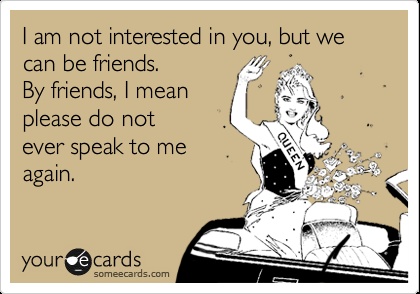 A note from Holly:

I just want to provide a little more context to this situation as I feel that Heather was too kind. Especially regarding The Resurgent....because here's the deal...the Resurgent is a jerk. No one can disagree with me because I still have screenshots of text message exchanges between him and my baby sis and my opinion is unwavering. 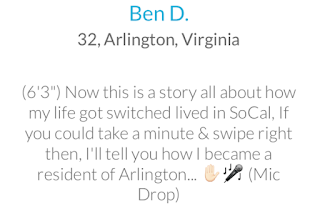 Soooo....is now a good time to tell Brad that I actually can't swim? Is skinny drowning a thing? 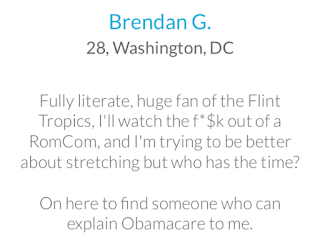 BRENDAN! I need someone to explain Obamacare to me too!!! 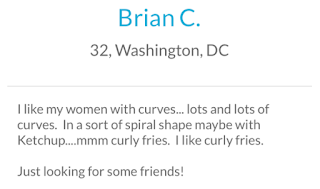 This is weird to me. It's weird, right? 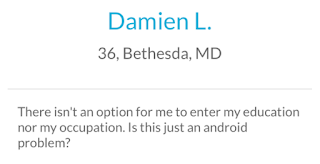 Damien, sugar, if you're asking for IT help in your tagline, I'm going to have to rule you out as my fix-it man...

WHAT?! I can't even process what you're trying to say here, Jared. 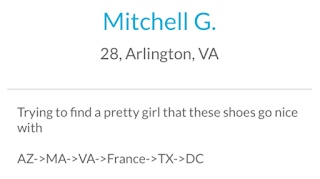 Look Mitchell, history tells me that I've got a pretty bad gaydar but this seems concerning to me.

It's funny because you must in order for you to show up on Hinge. Well played, Pat D. 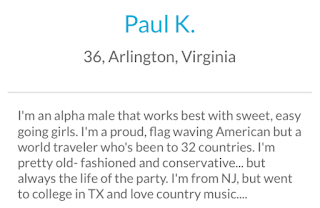 Paul, I'm obviously not a pro at this whole dating thing. However, I do know one thing with absolute certainty: If you have to tell me that you're an alpha male, you're doing it wrong! Seriously! If you're an alpha male, you don't need to tell people...sorta like telling people that you're the life of the party. If you are, everyone at the party knows it and they don't need you to announce it. Also, you saying that you "work best with sweet, easy going girls" basically translates to me thinking you've got a promising future as a wife beater. Paul K. was an easy left swipe. 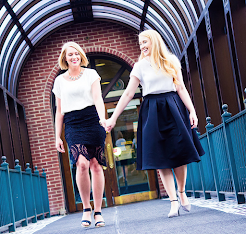 Heather lives in St. Louis, MO and works in the field of social work. She already has a very important man in her life, her pit bull Sully, and enjoys volunteering with a local pit bull rescue agency. She also enjoys Thunder games, all things related to the University of Oklahoma and her roomie.

Holly lives in Washington D.C. and works in risk and crisis communication. She loves baking, traveling, high heels, and her fur baby, Boston. She also enjoys volunteering as a special recruitment consultant for her sorority and teaching at a local university.

We're committing to a year of openness and blogging! We're documenting the ups and downs and are happy you're here to share in our adventure!